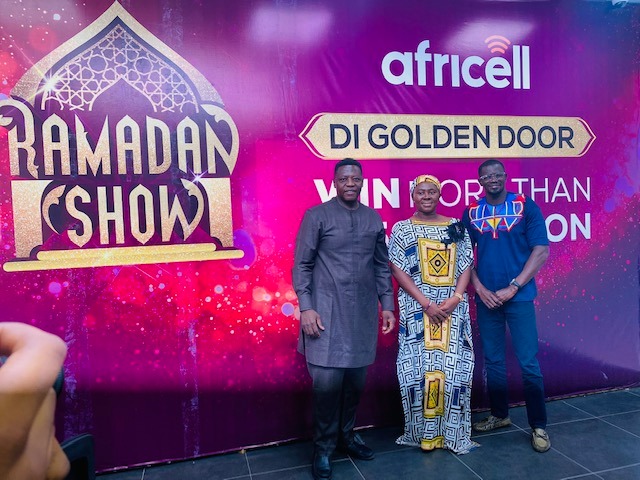 As part of its efforts to continue to put smiles on the faces of its valued and esteemed customers across the country during this month of Ramadan, one of Sierra Leone’s leading GSM Company in the country, Africell SL has on Friday 1st April, 2022 launched its “Di Golden Door” Ramadan Show. The official unveiling ceremony took place at the Africell’s Headquarters in Wilberforce.

Speaking at the launching ceremony, Africell’s Chief Corporate Officer, Joe Abass Bangura, disclosed that as a company that respects all religious faith in the country, it is pleased to join Muslims in Sierra Leone and the world over in heralding the Holy Month of Ramadan.

In that respect, he added that Africell is proud to maintain its tradition of being at the cutting edge of technological innovation in the industry and always bringing innovative promotional events that provide their subscribers with opportunities to celebrate their religious festivals with fun and games and eventually winning great prizes.

Joe Abass Bangura further disclosed that this year’s Ramadan promo dubbed: “Di Golden Door Ramadan Show” will commence on the 4th April and will last on to the 30th April, 2022 and will provide subscribers with the opportunity to win more than Le 500,000,000 (Five hundred million Leones) by the end of the promotion.

The Assistant Media Manager at Africell, Nancy L. Toure, further explained that for subscribers to participate in the “Di Golden Door” Ramadan Show they should be Africell subscribers.

She added that Africell subscribers should send blank SMS to or call 777 or perform any transaction using AfriMoney to automatically qualify for the electronic draw for that day.

“Every blank SMS sent, or call made to 777, automatically gives the subscriber a chance at a cost of Le650.00; which is given back as On Net bonus, which must be utilized before midnight of the same day,” he maintained.

Nancy Toure maintained that during the draw, there are two stages which are stage one and two where qualifying numbers will be randomly drawn electronically during the live show on AYV Television which will be linked to AfriRadio and all major radio stations in the country.

She, however, reminded subscribers and the general public that the stipulated Lottery Tax on Le500,000 to Le10M which is 10% will be deducted, adding that a tax of 20% shall also be deducted from winnings from Le10M above payable to the NRA