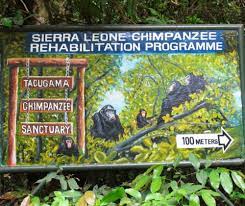 Did you know that Outamba Kilimi National Park was the first national park to be gazetted in Sierra Leone? OKNP is rich in biodiversity, especially wildlife. Animals like the endangered western chimpanzees, elephants, hippopotamus and duikers among others are living in this national park. In a drive to conserve and protect this wildlife, Tacugama Chimpanzee Sanctuary (TCS) is partnering with the Wild Chimpanzee Foundation (WCF), an organization based in Guinea, to implement an E.U sponsored project ‘Towards a participative, inclusive, and sustainable management of the Forest landscape complex of Outamba-Kilimi (Sierra Leone), Kuru Hills (Sierra Leone), and Pinselli-Soya (Guinea). The OKKPS project aims to sensitize people about the importance of conserving our environments and wildlife.

Baby Rushni is a six-month old chimp who has been living at the TCS for over 5 months. Rushni is an ambassador chimp who represents all the other individuals that Tacugama has been rescuing over the last 27 years. Baby Rushni was saved from OKNP after her parents were killed by hunters in the park – thankfully, she is now recovering and doing well at the chimpanzee sanctuary in Freetown.

According to the Jane Goodall Institute UK, humans and chimpanzees share 98.6% of the same DNA. Even though Little Rushni and we humans may look different, we share so many similarities. For instance, both humans and chimpanzees play; they have complex emotions and intelligence, and a very similar physical makeup. Before I started working at TCS, I did not know that humans and chimpanzees share such similarities. The situation is quite different now because every day I get an opportunity to see the different personalities and emotions of the chimpanzees. Since working at TCS it has occurred to me that we should try our hardest to protect these beautiful animals. TCS is currently home to 111 western chimpanzees. When visiting TCS you will breathe fresh air and notice that you are in an entirely different environment away from all the noises in the city of Freetown. The calmness of the winds, the sound of the rainforest, and the talking birds are in their entirety some of the most beautiful moments you will experience in your lifetime.

In Sierra Leone we are lucky because our country is home to one of the largest collections of endangered western chimpanzees in the world. However, these striking animals are almost extinct in Sierra Leone due to human activities and encroachment. According to an estimate from a national chimpanzee census conducted in 2010 there are only 5,500 wild chimpanzees left in this country. Almost 10 years later, on the 28th of February 2019, the chimpanzee was declared the National Animal of Sierra Leone, making it the first and only country to have a great ape as an official national symbol of a country. With a conservation status set as “critically endangered” due to deforestation, logging, encroachment, and poaching for bush meat or pet trade, it is critical to act now before this species disappears from the face of the earth!

To fight against this alarming fate, TCS is embarking on a National Animal Campaign (one component of the OKKPS project) to raise awareness about chimpanzees and change people’s negative perceptions of them. The main goal of the campaign is to instil a culture of Sierra Leoneans who are proud of their national animal and understand the urgent need to protect and conserve chimpanzees. Therefore, the Chimpanzee National Animal Awareness & Protection Campaign (CNAAPC) aims to encourage Sierra Leoneans of all ages and backgrounds to fully embrace this pioneer declaration and protect and respect chimpanzees. The campaign will mobilize several media avenues, including radio sessions, visual media, and other promotional materials to spread awareness about this great ape and the critical threats it faces.

The CNAAPC was officially launched in January 2022 and the first year of the campaign will take place in Freetown and include several sensitization programs as well as in-person events and activities, including Chimp Week from the 9th to 15th  May 2022. The CNAAPC targets everyone because it takes the entire nation to help protect these animals. If everyone knows that the chimpanzee is the national animal of Sierra Leone and is also the face of tourism, then it will be easier to stop activities like the illegal wildlife trade or trafficking, keeping chimps as a pet, and hunting them, among others. There are a lot of exciting family-friendly activities being set up ahead of Chimp Week in May 2022. The activities include a kid’s march starting at Youyi Building and ending at the Victoria Park, a football tournament at SS Camp Football Field, a storytelling event at the Freetown City Council Hall, an Art Exhibition at Toma, a Gala Night at the Radisson Blu Hotel, as well as special promotions for anyone wanting to visit TCS. Now, this is an exciting part; anyone who purchases tickets for the Gala Night will receive a 15% discount off a ticket with Brussels Airlines. If you want to be part of or sponsor any of the activities of Chimp Week or are interested to find out more about our OKKPS Project don’t hesitate to contact us at