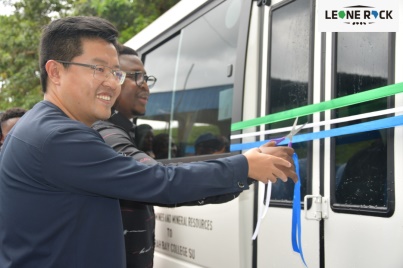 Transportation has been a serious challenge for on-campus resident students who seek tertiary education from West Africa’s oldest university. Fourah Bay College (FBC) in Sierra Leone which is situated on the top of an isolated Mt Aureol in Freetown, is providing tertiary education to over 12,000 students offering courses in all levels for certificates, diploma, bachelors degrees, masters and PHDs.

However, this college (which is a constituent of the University of Sierra Leone) over the years been fraught with serious transportation challenges to ferry staff and non-resident students to and fro the campus.  This has seen vulnerable students exposed to road accidents along with the tragic consequences of death.

As a result, Leone Rock Metal Group on Friday 24th June 2022 donated a 27-seater Bus to the Fourah Bay College (FBC) Student Union in memory of Emadu Rogers. He lost his life in a tragic accident a day before his graduation on March 7th 2022.

This donation is part of the company’s Corporate Social Responsibility (CSR) in serving the country especially in promoting quality education for all.

During the handing-over ceremony, which took place at the college campus in Freetown, the Minister of Mines and Mineral Resources, Musa Timothy Kabba stated the relevance of the donation and how it will impact the general student body remarkably especially for non-resident within the confines of the university. He charged the students to take proper care of the bus as they had exhibited the love shown to their late colleague.

The CEO of Leone Rock Metal Group, Gilbert Zhao as a visionary leader emphasized his continuing support for quality education in Sierra Leone. He said the company’s support for education does not only limit itself to its immediate operational areas. Hence, the donation, he said, is a bus, but the desire is enough to show that Leone Rock Metal Group is a local company which is keen on investing in human capital development.

Salim Sillah, the Director at the CEO’s Office, Leone Rock Metal Group, who also is an alumnus of FBC advised the Students Union Government of FBC to take good care of the Bus as it will open doors for more.

On behalf of the college administration, Professor Lawrence Kamara who is the Deputy Vice-Chancellor and Principal of FBC recounted the challenges faced by students in accessing lectures. He said the donation by Leone Rock Metal Group is timely and will ease the burden on students and will also ensure that they are safe in accessing lectures to and from campus.

On behalf of the students, the Vice President of the Student Union FBC assured individuals present of their commitment in handling the bus with care. He said they as students have seen first-hand the sufferings others face and that they are committed to utilizing the bus for its desired goals.

The event ended happily as the Minister of Mines who collaborated with Leone Rock Metal Group handed keys to the bus to the Deputy Vice-Chancellor of FBC.