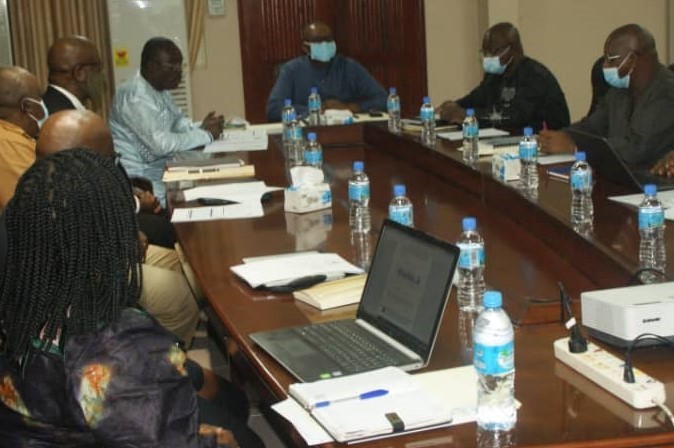 The Vice President Dr. Mohamed Juldeh Jalloh on Wednesday August 4, 2021 hosted the inter-ministerial committee on Sierra Leone Social Health Insurance Scheme (SLESHI)  at the conference room of the Office of the Vice President  to discuss issues of health insurance scheme for Sierra Leoneans.

In his opening statement the Honorable Vice President outlined the importance of SLESHI stating  that it is the vision of HE President Julius Maada Bio  to provide affordable health care to Sierra Leoneans and this is a huge step in that direction.

SLESHI is a social health insurance scheme for Sierra Leoneans that focuses on the reduction of “out of pocket” expenditure on medicals. It aims at improving access to quality medical services for all and improve equity in medical services.

According to the Minister of Health and Sanitation Dr. Austin Demby, the discourse  revolved around how the government can improve the health care system of the country and to develop a health insurance scheme that will enhance public access to quality health care service and reduce “out of pocket” healthcare expenditure for the people.

He furthered that the scheme will require members to pay a minimal amount as contribution that will enable government provide quality medical services to members when they become ill without rendering them poor.

He said the Scheme is targeting the general populace in various categories including the formal and informal sectors as well as create a safety net for the most vulnerable group especially the aged.

He furthered that the scheme is an instrument used to gain universal access to quality health service for all. The Minister noted that the committee is working on the different contributions for each category which he assured will be very minimal and affordable.

The Minister of Labor and Social Security  Osman Alpha Timbo Esq. said the health insurance scheme is part of Social Protection adding that, the minimum standards for social security is contained in the Social Security Minimum Standards Convention 102 which gives provision for nine contingencies in social security.

He noted that government had covered part of the nine contingencies which are old age, invalidity and death and survivor’s benefit under NaSSIT, and that going forward, government is looking into health insurance.

He continued that the scheme will entail the employee and employer’s contribution and a well defined benefit to be covered by the scheme which will be guided by the Ministry of Health and Sanitation.

In attendance were the Chief Minister and other ministers.