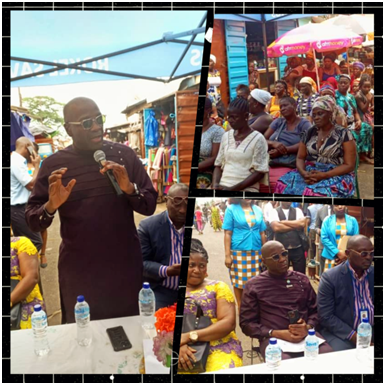 The Krootown Road Market Women Group was loaned the sum of Le 101 Million by the Rokel Commercial Bank, on the 1st August, 2022, in a bid to empower women who are engaged in Micro, Small and Medium Enterprise (MSMEs).

In his statement during the symbolic handing over ceremony of the cheque to the beneficiaries, the Managing Director of the Rokel Commercial Bank,Dr Ekundayo Walton Gilpin, said what they want to do is to relate themselves with market women who are in small and medium enterprise.

He went on to state that one of the functions of bankers is not only to sit in the air conditions, with a coat and tie but to help smaller businesses thereby growing the economy together.

It was against that backdrop that the RCB moved to various markets in the Western Area Urban to provide loan facilities for MSMEs, as women are in the majority in that sector. He therefore encouraged the women to pay the loan back to the bank as the money they are giving them does not belong to the Management and Staff of the bank but belongs to shareholders and they are only managing it. He ended on the note that their interest rate is better than other commercial banks thus making them the Peoples’ Bank. He added that with the loan facilities for this sector will grow the economy.

Director of Credit Risk Department at Rokel Commercial Bank, Morrison Conteh, noted that the beneficiaries are happy to receive the loan but for him the only time he will be happy is when the women go through a repayment schedule which is a policy to recover loans.

He furthered that over the years they have been having challenges in recovering loans from Sierra Leoneans particularly smaller business owners who have wrong notions that the loan provided to them by commercial banks is political money, therefore they should deviate from that perception.

Morrison assured the women that they want to maintain a chain of relationships with market women but the only way to do that is to pay the loan back as money is available and what the RCB has done is just the pilot phase saying there is more to come if they comply with the repayment schedule.

She also commended the Managing Director of RCB whose leadership, she said, has continued to raise the banner of the bank higher on a daily basis. Madam Hawa Rogers emphasized that the women should have credibility and put politics aside for now and concentrate on development. She appealed to the women to repay the loan back to the bank so that more will come and for those who did not succeed during the first phase to exercise patience as their time will come. She described RCB as the bank that is there to ensure women grow in society.

Manager of SMEs Department at RCB, Haja Fanta Jalloh, made mentioned the financial inclusion strategy of the bank adding that they want to bring everybody onboard the banking system as they believe that will enable market women or smaller business owners to access loan facilities from RCB. She encouraged them to inculcate the habit of saving as it is good for them and their children.

Ramatu Bangura, who is the Chairlady of the Krootown Road Market Women Group thanked the Rokel Commercial Bank for providing the loan and promised that they would not let the bank down. She confessed that they have never had that kind of opportunity from any commercial bank in the country saying therefore they will make sure they live up to the expectations of RCB.