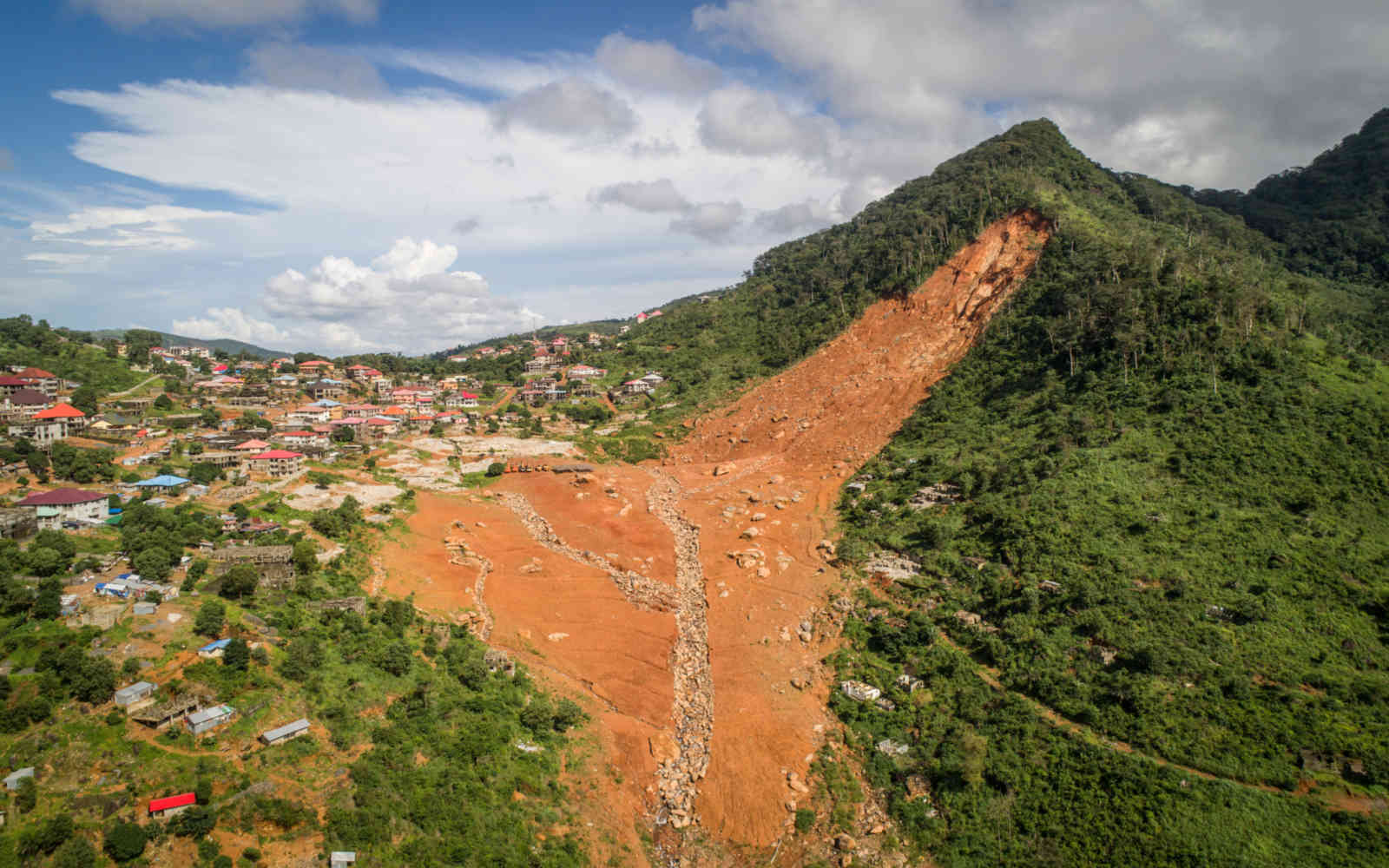 It has been five years since the horrific mudslide which took the lives of hundreds of Sierra Leoneans and left many others injured and homeless happened in Regent, on the outskirts of Freetown. We pray that the souls of those who were lost on that fateful day find eternal rest in God’s Kingdom. The sad part is the mudslide was to a large extent triggered by humans. It saddens my heart to see people engaging in deforestation which is one of the causes of the mudslide despite the devastating August 14th incident. Can’t we learn from our mistakes and correct our wrongdoings? I am sure we can. When catastrophe hits, humans are the ones who bear the consequences and pay with their precious lives. People are still living in risky areas and destroying the environment along with its rich biodiversity.

A mudslide occurs when a large amount of water causes the rapid erosion of the soil on a steep slope, often after a period of intense rainfall. The great volume of water mixes with soil and causes it to liquefy and move downhill. The occurrence of mudslides can happen more frequently when humans cut down the trees on hills as these provide stability to the ground. Without the trees, the stability of the soil is reduced and it becomes even more likely for a mudslide to happen. The consequences of mudslides can be minimized if there are large forests and good soil to withstand the pressure that comes with them.

The 2017 mudslide occurred very close to the Western Area Peninsular National Park. Locals living around that area destroyed and exploited the forest for agricultural purposes and economic gains. This left the area empty and exposed thereby; making it a possible death trap if there was a heavy downpour. In order to protect ourselves and our loved ones, we must stop building houses and cutting down trees in protected areas! Cutting down the trees also means destroying the natural habitat of thousands of species including Chimpanzees, and it is these animals that keep the forest going. When chimps eat fruits, the seeds they leave on the ground eventually grow into a tree. They cover a lot of areas within a short time, so the more they move, the more they disperse seeds along the way. Therefore wildlife plays an important role in keeping the forests alive. Forests by themselves do not easily grow and expand. Each and every living organism in the forest has a role it plays in keeping both the forest and the environment safe. This can prevent a lot of bad things like mudslides and droughts from happening. That is why it is important for humans to leave the forests to the animals. Tacugama is discouraging the act of hunting these animals and destroying their habitats. If we don’t threaten them in their territories, then there would be no reason to keep Chimpanzees as pets, kill them or even bring them to Tacugama! “To protect the Chimpanzee and its habitat means mitigating climate change”.

Tacugama Chimpanzee Sanctuary (TCS) has been working relentlessly to keep both the Chimps and the Western Area Peninsular National Park free from human activities by engaging communities on the dangers of deforestation and environmental degradation. TCS has also been facilitating community reforestation programs and providing environmental education to schools in nearby communities. As part of its cooperative social responsibility, Tacugama has been giving a total number of 44 scholarships per year to pupils from R.E.C Regent, Church of Christ, Saio Elementary and Logos Experimental. These kids were victims of the mudslide. Also, Tacugama gives schoolbags, shoes and uniforms to 55 children (from the same schools). We also have plans to deliver the next support by September/October of this year.

There is still a bright future for these kids and all those who lost their loved ones in that tragic event. We can all work together to prevent events of this nature from happening in our beloved country. We can embark on a series of environmental protection projects like tree planting, and wildlife protection among others. We should stop building houses in protected and risky areas. With such initiatives, I believe we can see a different version of Sierra Leone that is enthusiastic about wildlife and environmental protection. We need the support of every Sierra Leonean because Tacugama cannot do it alone. Let this statement be a constant reminder to all of us that “Threat to wildlife protection is a threat to environmental security which can ultimately affect us all.”