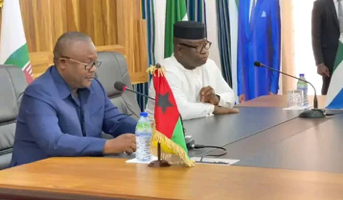 The President of Guinea Bissau, and Chairman, of ECOWAS Heads of State and Government, Umaro Sissoco Embalo, on Monday 15th August 2022, called for inclusive dialogue between the Government of Sierra Leone, opposition parties and other stakeholders in governance.

He made this statement during his solidarity visit to Sierra Leone, following the August 10th protest that led to the death of several innocent civilians as well as law enforcement officers.

Vice President Mohamed Juldeh Jalloh, Ministers, Ambassadors and other Government stakeholders were in attendance at the meeting.

Umaro Sissoco Embalo acknowledged the warm reception accorded him by the government of Sierra Leone.

As Chairman, the authority of ECOWAS Heads of State and Government, the visiting president said, he felt sad about the 10th August event in the capital and other parts of Sierra Leone, which led to the deaths of innocent civilians and law enforcement officers and the destruction of several public and private property.

He expressed, on behalf of the ECOWAS Community and the people of Guinea Bissau, his heartfelt sympathy and condolences to the bereaved families and the government,

Umaro Sissoco Embalo further condemned the 10th August violence which he said,   has no place in a democratic nation – especially for a country like Sierra Leone ranked as 14th most peaceful country in Africa.

As chairman, the authority of ECOWAS heads of state and government, he also urged president Julius Maada Bio to engage with various government stakeholders in the coming days – including the peace commissioner, as well as youths and the opposition party.

Umaro Sissoco Embalo, underscored that despite the president of Sierra Leone Julius Maada Bio having informed him that he will be meeting with the traditional chiefs, religious leaders, and political party leaders, he mentioned that the ECOWAS will continue to stand with Sierra Leone at all times.

He also asserted that as President of Guinea Bissau, he had faced similar challenges in his country. However, he affirmed that with the help and advice given to him by a few parliamentarians, he was able to do the needful by having a sit-down dialogue with the opposition party and other government stakeholders to salvage the situation. He added that the idea of inclusive dialogue worked for him and the people of Guinea Bissau and therefore urged the president of Sierra Leone Julius Maada Bio to also do the same in order for peace to prevail.

He urged Julius Maada Bio to focus more on inclusiveness and that his policies should be for the betterment of all Sierra Leoneans.

He concluded by advising the president of Sierra Leone Julius Maada Bio not to use force or fire to quench the fire, but rather lead by example and calm the storm. He emphasized that the advice is coming from the depths of his heart, as Guinea Bissau and Sierra Leone are one family – and the act of division is not a good example to set.