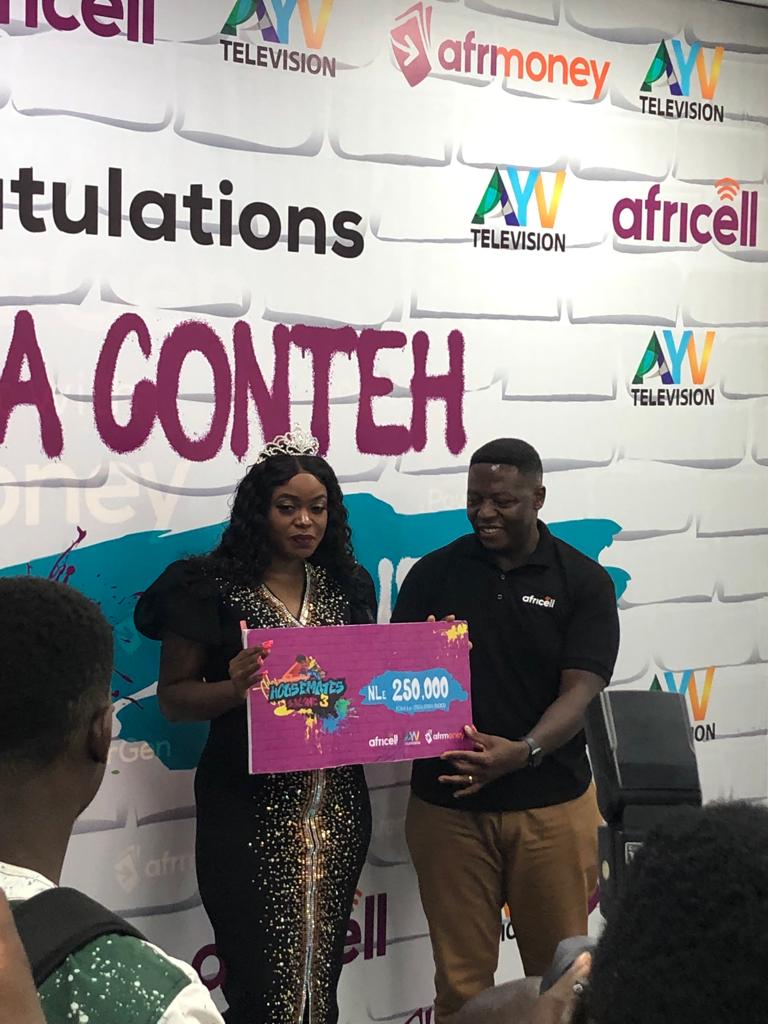 On Friday 19th August 2022, at a ceremony held at the Africell HQ Boardroom at Wilberforce, Africell Sierra Leone and the African Young Voices presented the Star Prize of Le 250,000 (250 Million Old Leones) to Juliana Conteh, aka Julie ‘Tombo’, winner of the Housemates Salone Season 3 reality TV show, and other winners like the second and third Runners-Up also received prizes. It also saw the official announcement of new Brand Ambassadors of Africell. The ceremony was graced by Africell and AYV members of staff, Ex-Housemates, as well as current Housemates, other dignitaries and the fourth estate. The program was moderated by Abdul Aziz Kamara.

In his opening statement, Africell’s Media and Marketing Officer John Konteh gave an overview of the just concluded reality TV show in Sierra Leone, noting that it was a hectic and thrilling process leading to the show, which started from the announcement to the audition, and the show itself. “It was an exciting 9 weeks of entertainment and education in this year’s edition of the show.” He also disclosed that Africell and AYV, recently took all 10 finalists on vacation to Dubai, UAE.

Mr. Konteh furthered that the event was held to fulfil the promises made to the contestants, especially the winner.

“We are here today to follow through with our promises.”
“We promised that our winner will be taken on a vacation trip to Dubai, that has been fulfilled, and we are here to also fulfil another promise, that is to deliver the star prize of Le 250,000 to the Housemates Salone Season 3 winner Juliana Conteh, popularly known as Julie Tombo,” he noted.

Representing AYV TV, Samuel Wise Bangura described his institution’s (AYV) relationship with Africell as “a family relationship”, as they share similar values and goals to promote entertainment in Sierra Leone. He said that the CEO of AYV, Anthony Navo Jnr. will continue to commit to his promise to promote and showcase Sierra Leone through entertainment, adding that the organizers are currently planning on the upcoming edition, which he said will be epic. He stressed that the desire of Navo Jnr. Is to enable young people to discover and showcase their talents in all spheres, and that young person should lead in the development trajectory of the country.

Corporate Affairs Manager of Africell, Joe Abass Bangura, in his motivational address, referenced Julie’s story as a classic inspiration to young girls and women, who felt let down in society and are ready to fight back to success.

In her statement, the HMSL Season 3 winner, Juliana Conteh, aka Julie ‘Tombo’ expressed her appreciation to the Almighty for leading her to the show, and also extended her gratitude to AYV and Africell for the platform given to her and her colleagues to share their stories with the people.
“What seemed impossible, became possible,” she said.

Julie also recognized a woman she described as a caregiver and mentor, who looked after her kids when she was away; who was also delighted to see the transformation of Julie’s belief in herself.

Expressing her delights for receiving her star prize and her new endorsement as brand ambassador for Afrimoney, she dedicated these achievements to the people who supported her, her kids, her boyfriend Nohmi George, and her ‘Tombolistic’ team.

The ceremony was fully attended by the organizers, the media, ex-housemates, and fans. Presentation of the star prize and other prizes climaxed the event.