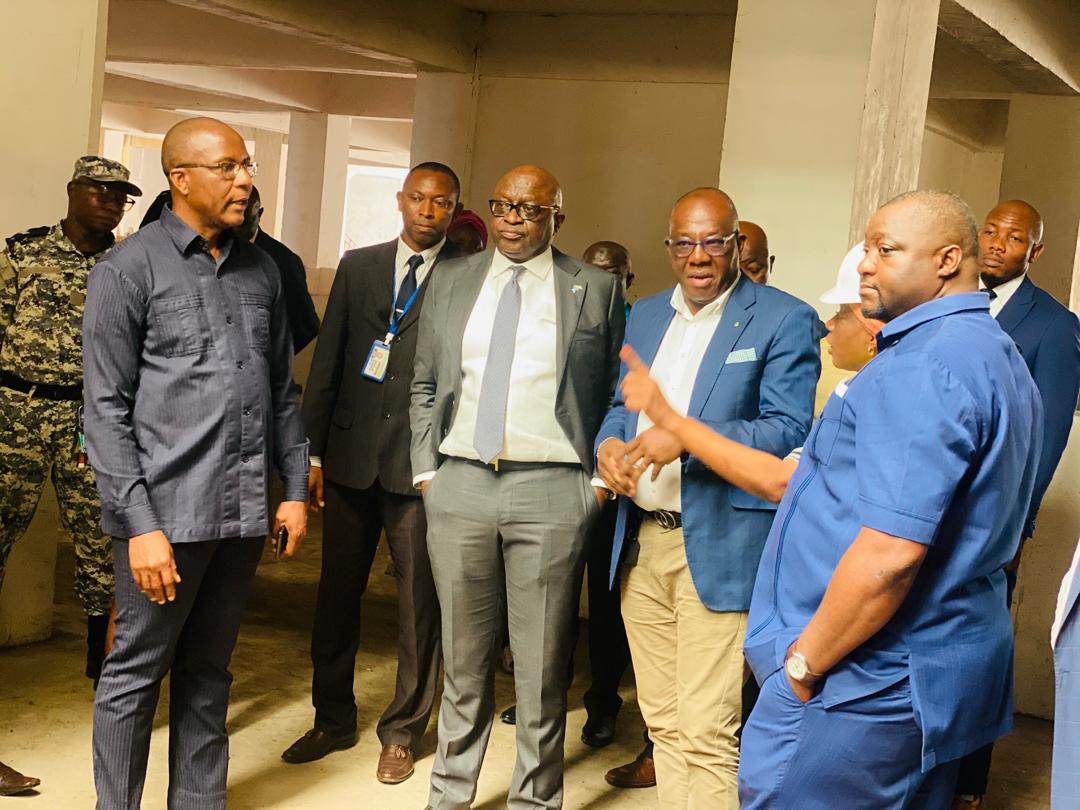 On Monday 29th August 2022, the Director General of NASSIT (DG), Fouaad Daboh, officially handed over the newly constructed Sewa Grounds Market to the Contractors for completion at the Sewa Grounds, which, according to him, is slated to be completed against the next 120 days.

During the ceremony, NASSIT DG expressed happiness in being part of this epoch-making ceremony to showcase the work of the government to develop trade in the country. He furthered that NASSIT looked at all the issues of the project, with a view to satisfying traders who will be occupying the structure, hence the various accessories provided in the facility. He noted that there were concerns about security issues, as many market women made complaints of security risks to their businesses since street boys and criminals often steal their wares. It is in respect of these and other concerns that consideration was taken to include ways to address them in the new facility.

Fouaad Daboh made reference to some of the various challenges faced by the women whilst trading at Sani Abacha Street but maintained that with the new facility, there is enough space for traders and that they will also have access to banking facility, clinic, children’s playground etc. stressing that relocation to the Sewa Grounds will enable road users and other customers and wholesalers having business houses in the vicinity to go about their businesses with ease at the Sani Abacha Street. He expressed hope that if the contractors keep to their commitment, the facility will be ready for use in January 2023.

DG Daboh further stated that the facility has over 1000 market stalls, with 76 warehouses available for importers and other businesses to keep their goods for sale to the traders, thereby reducing the time and burden of having to go into town to buy from shops for later sale. He also disclosed that the facility has over 200 shops, adding that the government is currently looking at other markets in the city, with a view to changing their outlook and making it comfortable for both traders and customers. He also maintained that the facility will be well managed and structured, so that people could get stalls at affordable cost, and that they are hoping to relocate all market women in the CBD to the Sewa Grounds in a very conducive atmosphere.

Giving a brief history of the Sewa Grounds Project, Mr Isaac, the Project Manager, said that they have been on it for years, during which they had many meetings with various MDAs, making adjustments where necessary. He disclosed that the facility has four different types of stores, toilets for both males and females, have warehouse stores for traders, who do not have to take their wares home daily. He maintained that there are some 76 such storage facilities, so traders will not have to worry about where to keep their wares at the end of the day. Unlike the Sani Abacha Street area, where there are no toilet facilities, the Sewa Grounds Market has toilet facilities for both males and females, availability of water, electricity and standby generators to complement all other activities taking place at the facility. To ensure security, which was a major concern of traders, he disclosed that a police post has been established there, and there is going to be a fire force detachment to address fire issues, a cleaning team for the facility, and a place for nursing mothers to leave their kids whilst engaged in their respective businesses. These kids can use the playground while waiting on their mothers. He noted that the Contractors, a week ago, made a commitment to the government that they will hand over the facility in the next 120 days, which is in January 2023.

In a statement given by the Deputy Minister of Labour, he emphasised that after the August 10 saga, the President, as a listening President called all stakeholders in respect of the Sewa Grounds, and its readiness for use by the traders, so as to end the perennial strife on the streets with criminal gangs, as well as exposure to the elements of nature (rain and sun). During this engagement, a commitment was reached with the contractors for the commencement of work, and a time frame reached 120 days for its handing over for use. He disclosed that working on the project are seven contractors, to enable them to deliver on the specified dates. He called for the traders to take ownership of the facility when completed and called on all to think positively about the country’s development. The Minister assured all of the safety of the facility and their businesses and admonished the contractors to abide by their commitment to the President.

Transport & Aviation Minister, Kabinneh Kallon, expressed happiness to see the progress of the work on the facility so far, stating that the Project started 10 years ago, but stalled on the way, and was rejuvenated by President Bio. He furthered that will be let out to traders on renting basis. Since it has enough space and available security, buyers will feel safe when in the facility, adding that there are arrangements for various wares to be located in specific areas, so as to ease accessibility for the buyers. He called on traders who would be occupying the facility to be the watchdogs of their neighbours and to report any willful destruction of any of the accessories in the facility.

The ceremony climaxed with the official handing over of the Sewa Grounds Market Project to the Contractors by the Director General of NASSIT, Fouaad Daboh.