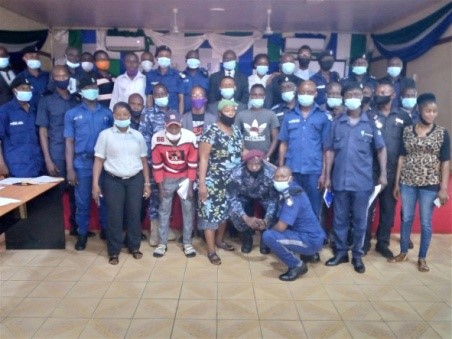 The Legal Aid Board has concluded a nationwide UNDP- funded training of police Investigators and Prosecutors on the 2018 Bail Regulation on 29 July 2021. The final training took place in the Kailahun District Council Canteen in Kailahun town.

The training was conducted in eight districts with Kailahun being the last. The project targeted 50 Investigators and Prosecutors from each district thereby bringing the total to 400 officers who benefited from the training during the last four weeks.

The first training was held in Moyamba district on Wednesday 7 July 2021. This was followed by Bo on July 8; Kambia on July 14; Port Loko on July 15; Kono on July 21; Tonkolili on July 22; Pujehun on July 27 and Kailahun on July 29 respectively.

The training was geared towards addressing abuses and challenges in respect of bail which people face from the time they are arrested by the police until their matters are concluded in the courts.  This will enhance the capacity of police officers to address injustices and conflicts in communities.

Moreover, the officers were trained on the guidelines and factors which they should follow when granting or denying bail to suspects at police stations or accused persons in the courts. This is meant to ensure consistency in the application of bail both at the police and the courts as prescribed in the Regulation.

Presenting a paper on the Bail Regulation in all eight locations, the Lead Facilitator who also doubles as the Legal Aid Board’s National Supervisor, Counsel for the North-West, Mohamed Korie explained the meaning of bail. He cautioned that bail does not mean the end of a matter, but rather the temporal release of a suspect or accused person pending further investigations or proceedings. He added that bail is free and it is also a right. He admonished Investigators and Prosecutors not to deny or oppose bail just for the sake of punishment.

He also explained the various types of offenses, adding that Investigators need to know the elements in the different types of offenses to be able to proffer the correct charges. He said that the purpose of Criminal Law is to protect society by ensuring people respect the law and not to appease or satisfy victims.

He went on to explain where to access bail, guidelines for opposing or granting bail which he said include necessity, reasonability, proportionality, enforceability, etc.

Counsel Korie also explained the importance of granting bail, bail guidelines, circumstances under which bail may be denied for indictable offenses. These include failure to appear in court, committing another offense while on bail, endangering the safety of victims or the public, possible interference with witnesses, etc.  He further explained what it means to be a surety and how can one cease to be a surety. Asked on whether an Investigator ought to inform a complainant before putting a suspect on bail, Counsel Korie said there is no such law.

Responding to a question from the Crime Officer of Tankoro Police Division, John Mannah on how to stop police investigators from demanding money for bail, Counsel Korie said Investigators must always ensure they informed suspects or their sureties that the amount stipulated on the bail bond is not meant to be paid before the suspect is put on bail.

In response to a question from participants in Pujehun and Kailahun regarding the granting of bail to suspects accused of sexual penetration, Counsel Korie said he is not aware of any such law.  He said the only cases or offenses the Police or Magistrates are prohibited from granting bail are murder and treason.

He challenged the Investigators and Prosecutors to produce evidence or any authority that prohibits them from granting bail to suspects of sexual penetration. This follows repeated retorts from Investigators and Prosecutors that there was one between the Sierra Leone Police on one hand and the Office of Attorney General and Ministry of Justice and Judiciary on the other. They said this is one of the reasons why sexual penetration suspects spend months in police cells before being charged to court.

Counsel Korie admonished the Investigators and Prosecutors to follow the Regulation to the letter. He noted that operating under a regimental force does not mean one should carry out unlawful orders. He said justice starts at the police station and as a result investigators should stop using bail as a means of punishment or satisfy victims, complainants, politicians, or their superiors. He condemned the long pre-trial detention of suspects as one that has a negative impact on the image of the country’s justice system.

He underlined that the Board wants to ensure consistency in the application, granting, and objection of bail in the police and courts as provided for in the Regulation, noting this will help decongest correctional centers and police cells. He said “Collecting money from people in exchange for bail is wrong and is against the fundamental principles of the country’s 1991 Constitution,’ he warned.

Group work presentations on the various scenarios on bail intersperse with questions and answers climaxed the training.