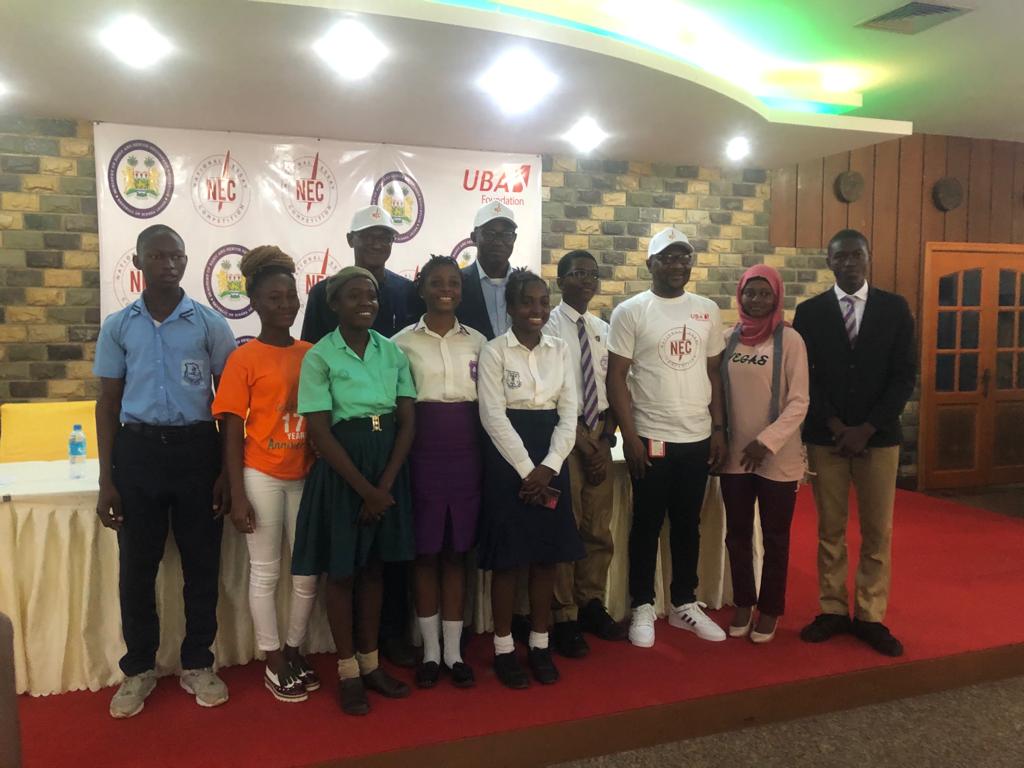 The Managing Director and CEO of United Bank for Africa Sierra Leone   (UBA-SL) Usman Isiaka has said he believed that the UBA Foundation 3rd Edition National Essay Competition will give children across the country the opportunity to participate in the life-changing competition whilst also offering them a chance to strengthen their critical thinking, civics. Other skill sets relevant to their growth.

He made this statement on Friday11th November 2022, during the launch of the 3rd Edition of the National Essay Competition (NEC) for pupils in Senior Secondary Schools in collaboration with the Ministry of Basic and Senior Secondary Education (MBSSE) at the Bintumani Conference Centre in Freetown.

‘’ The winners will be given an opportunity to win scholarship grants for their university education in any African University of their choice up to the limits of 50,000 Leones, Le 30,000 and Le 20,000 for the first, second and third positions respectively,’’ he said.

Mr. Usman Isiaka said that the Essay competition is the UBA Foundation initiative that started in 2011 as part of UBA Group’s drive to improve the access to education for the underprivileged across Africa adding this year will mark the 3rd edition of the Competition in the country.

The UBA CEO noted that the essays submitted by participants at the 16 district levels will be marked by a panel of academic judges who will be selected by the MBSSE and UBA adding the announcement of the 12 finalists of the competition will be made over TV broadcast, radio and newspaper.

‘’The 12 national finalists will be contacted using the information provided in the application for further details and the next steps. Finalists will be supported to travel to Freetown with either their teacher, parent, or guardian to compete in the final round UBA will provide travel, lodging and feeding of winners and their supervisors,’’ Usman Isiaka , the UBA CEO revealed.

The UBA boss said finalists will be required to write a second essay which will be evaluated for selecting the first, second and third place national winners that will get the scholarship grant while all the 12 Finalists who sufficiently defend their essays in a 5 minutes interview with the judges and meet a cut-off mark of 40% and above in the second rounds of the essay will each receive a laptop.

Board Chairman UBA-SL, Dr. Claudius Bart- Williams on his part said he was delighted to represent members of the UBA-SL Board on the official launch of the 3rd Edition of the UBA Foundation National Essay Competition whilst thanking the Minister and his team at the MBSSE on the strides the Ministry has made in bringing to fruition the presidents’ vision of providing free quality education to the children of Sierra Leone.

‘’ The UBA Sierra Leone Board of Directors constitutes of nine (7) members with five (5), Sierra Leonean including myself as the chairman. Local directors are part of the UBA Group’s strategic direction in domesticating the governance pattern, products, and services of the bank to meet the local requirements of the host economy in all its 20 presence countries in Africa,’’ he said.

He said that last year, the UBA Foundation National Essay Competition event was a huge success noting that the bank could not have done it better without the Ministry’s support.

‘’As you may be aware, the bank has credited the various accounts of the last three winners with a total sum of  Le 100,000 grant scholarship for their tertiary education, and the 12 Finalists including the winners were each given a brand new laptop computer to support them in their educational research and other activities,’’ Dr. Claudius Bart- Williams added.

Dr. Williams assured that they as a board remained committed to supporting the management of UBA-SL in actualizing the bank’s corporate social responsibilities in the areas of education, environment, economic empowerment and special project.

‘’ United Bank for Africa Sierra Leone continues to set the pace in the financial arena, expanding our products and services, branch network and establishing long-lasting business relationships that benefit all stakeholders within our business environment,’’ the UBA Board Chairman boasted.

Minister of MBSSE, Dr. Moinina David Sengeh, said the NEC might seem like just a competition but that is not what it is for them as a ministry stating that it is an opportunity for students to learn.

‘’NEC complements our ongoing work to improve learning outcomes for a positive impact on society. The essay competition offers an opportunity for pupils in SSS to strengthen their critical thinking, civics, and other skillsets relevant to their growth,’’ Dr. Sengeh said.

MBSSE said participants must submit their handwritten essays not later than 12th December, 2022 at any of the 16 ministry’s offices or at the UBA Bank headquarters at Charlotte Street and its other branches across the country.

‘’ All essays must be about the following topic: Transforming Education requires collective efforts including that of families and communities. Discuss specific interventions from families and or communities that can improve the quality of education ‘’

The 3rd National Essay competition will be from November – December 2022.