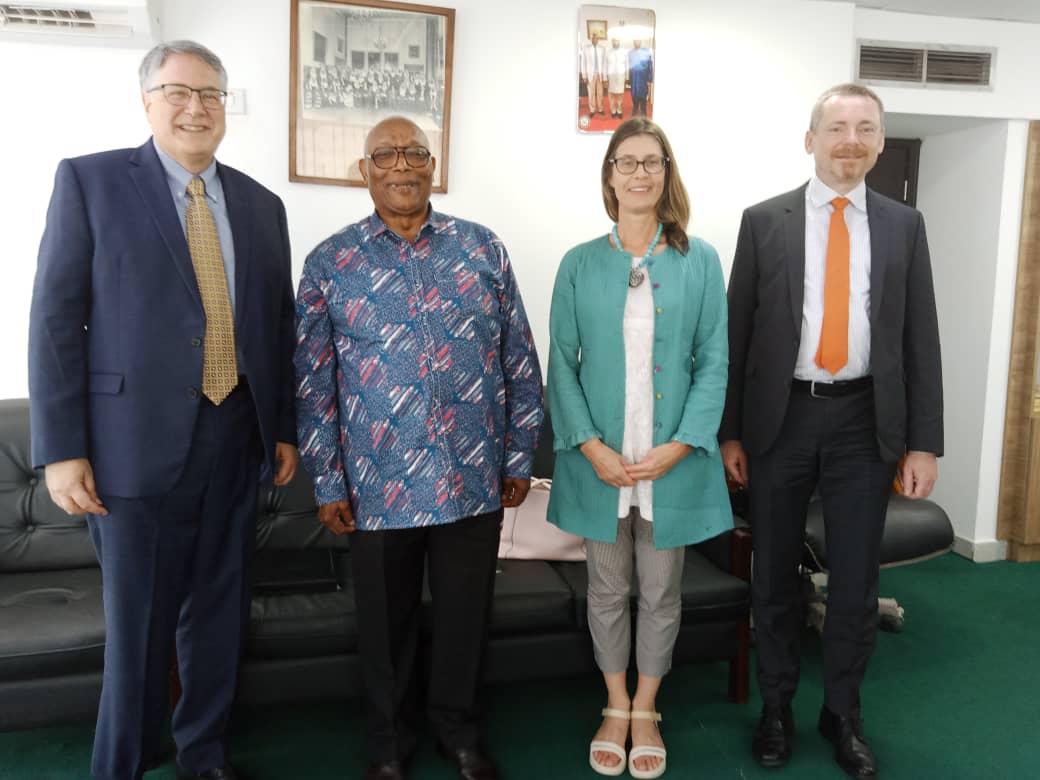 The delegation had a very successful consultative dialogue with the Speaker on a wide range of issues bordering on democratic governance, conflict resolution and national cohesion, the pending 2023 Elections, citizens’ participation in elections, electoral processes, Proportional Representation or District Block system, the position of the Opposition on the PR, and women’s participation and representation in Parliament and the latest Women’s Empowerment Act 2022, amongst others.

The diplomats were particularly concerned about ensuring that the entire electoral process was fair, democratic and credible and ultimately acceptable to all the parties and the people of Sierra Leone as a whole.

Responding to questions about the PR or District Block System the Speaker vehemently told the attentive delegation that, contrary to the misinformation that was prevalent on social media during the debate on the Public Elections Act, the PR system in the form of the District Block Representation system had long ago been incorporated in the Constitution of Sierra Leone since 2001 and had in fact been applied in the General Elections of 2002. He denounced rumours and speculations that had captivated social media to the extent of imputing that the District Block was going to be imposed for the first time solely for the benefit of a particular person or political party. He went on to inform the diplomats that the regulations appertaining to the 2023 elections were expected to be laid before the Parliamentary anytime in the current or subsequent week by the Electoral Commission of Sierra Leone bearing in mind the prescription in the extant ECOWAS Protocol that no law bearing on elections can be enacted within six months prior to the date appointed for those elections. Explaining the process, the Speaker stated that the regulations once laid would mature into law 21 days after that unless there was a motion for their annulment which would mandatorily require a vote of two-thirds of the membership of Parliament. In the event, there was such a motion and it failed to attract the requisite vote then the regulations would take effect immediately. He emphatically informed that the regulations on the PR/District Block would determine the processes and procedures for the allocation of seats in Parliament and the threshold to be attained by the political parties for that purpose. He also assured the delegation that, when the ECSL brings the PR regulations to Parliament, due diligence would be followed in accordance with the established law.

The Speaker also disclosed that the next Parliament, which doubles as the 6th Parliament, is expected to have one hundred and thirty-five Ordinary Members of Parliament and the fourteen Paramount Chiefs Members would remain the same making a total membership of one hundred and forty-nine.
Responding to the controversial issues surrounding the opposition APC internal conflict, the Speaker told the diplomatic that he had tried in his own modest way as Speaker to engage with members of the Opposition APC in Parliament to ensure that there was full compliance with both the 1991 Constitution, their Party new Constitution and the Rulings of the Courts so that they could fully participate in the electoral process in 2023 as that would contribute further to stamping the democratic ethos of the country and allowing democracy to continue to deepen its roots. This imposes a duty on all concerned to work assiduously towards resolving all the outstanding issues impeding the successful conclusion of their internal constitutional processes. He advised the diplomats to not shy away from lending their good offices towards that end for Sierra Leone and they have a shared interest in making sure that democracy survives and thrives in our body polity for all time in peace and tranquillity but he warned that time was fast running out.

The Rt. Hon. Speaker did not hesitate to tell the delegation about the opposition’s miscalculation in boycotting the Midterm Census. “In politics, you should not do anything that would cause miscalculation especially when they bear severe consequences.” he vehemently told the diplomats and went on to say, the opposition vigorously campaigned to their supporters to not participate in the census and be counted, but contrary to that, when it came to the voter registration, they encouraged their people to register in their numbers. Responding to a question on mitigating the situation on the boycott, he categorically stated that all must respect both the law of the land and the independence of the ECSL and that nothing should be done to impair or undermine those fundamental principles.

On women’s political participation and empowerment, the Speaker said the law had been enacted, but it was now left to the political parties to work within the letter and spirit of the law to ensure that the desired objective of increasing women’s representation in Parliament is achieved. He reaffirmed President Bio’s political will on the Gender law.

In another development, the German Ambassador to Sierra Leone engaged the Speaker of Parliament separately and had a dialogue with him on similar issues. The Ambassador congratulated the Speaker and complimented Parliament on the enactment of the laws on the empowerment of women.
Responding, the Speaker said it was long overdue for women’s emancipation to be given substantive meaning, considering their population percentage in the country The Rt. Hon Speaker categorically stated that the Gender law has been passed, but there were yardsticks to be met including the proper implementation and how many women are ready to come forward to work in public life.

The delegation assured the Speaker of Parliament of their continuous engagement with Parliament.